Mental health charities call for stronger action on climate change and support for NGO’s in the lead up to Black Summer Bushfire anniversary. 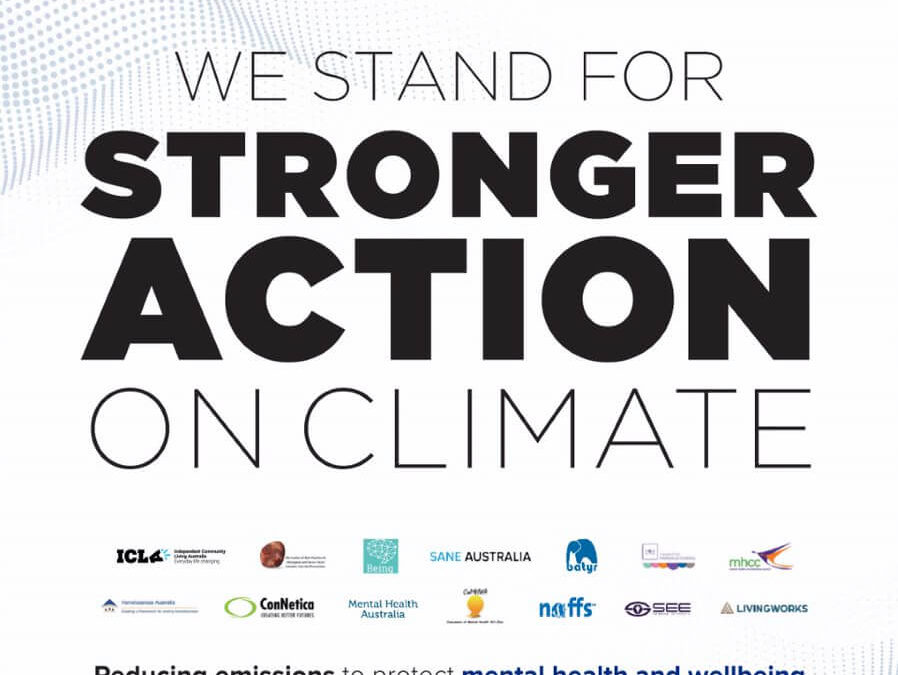 Mental health, disability, homelessness charities and peak bodies have come together to call for stronger action to reduce emissions and greater Government support in a bid to prevent a climate change curve in psychological crisis, post COVID.

With the bushfire season rapidly approaching, this weekend September 6 will mark the 12 month anniversary of the beginning of the deadly 2019-2020 bushfires. Multiple CEOs from leading state and national social and mental health care organisations, such as Independent Community Living Australia (ICLA), Mental Health Coordinating Council (MHCC) and LivingWorks Australia warn the psychological impact of this national anniversary is a timely reminder for the need to consider the effects of climate change and its impact on the community; including the consequences for increased mental ill health this summer and into the future. Sydney based national charity Independent Community Living Australia has led a group of fourteen nongovernment organisations in a bid to highlight the need for stronger action to reduce emissions in the face of the impact of climate change on mental health. As part of the Government response to the pandemic, ICLA is delivering of eFriend, a peer support service for people struggling with their mental health during COVID and according to ICLA CEO Rachel Green, the trained eFriend peers are hearing about distress related to climate change as a key issue impacting the mental health of people who access this service.

“We are hearing about the ongoing trauma experienced during the deadly bushfire season and the sense of feeling hopeless and overwhelmed when it comes to addressing our future climate situation” Carmel Tebbutt CEO of MHCC agrees “We know that climate change impacts disproportionately on people who are vulnerable, including many people living with mental health conditions. We are working every day to support people experiencing mental ill health to live full and contributing lives. A sense of hope and optimism is a critical part of this process including optimism about the health of our planet.“

To ensure this isn’t a short sighted awareness campaign, this group of climate leaders want to make sure the government is supporting NGOs to prepare to transition to a zero emissions economy, while supporting the community. A lack of Government financial incentives for emissions reduction make this difficult, especially in the Not for Profit sector – which Ms Green states, want to lead the way with greenhouse gas reduction strategies.

“We surveyed staff in January 2020 and Climate Change was their top concern. In response, our Board made a commitment to achieving Net Zero Emissions by 2050, but the reality is that as a not for profit NDIS provider we have limited funds to invest in emissions reduction. We are working to setup our first zero  emissions mental health service and exploring the feasibility of converting our fleet to fully electric vehicles, but the availability and cost for such a conversion is limited by a lack of Government incentives to boost the EV market and a lack of support for NGOs to transition generally.”

Its positive changes like this that Shayne Connell from LivingWorks Australia says allows us to look forward to our future in a new light.

“To rebuild communities we need hope, and we need to see leaders committed to preventing devastating catastrophes for our future generations.”

It’s been only with the help of community donations, not government support that Green’s vision for ICLA has taken one step closer to their zero emission fleet goal, with the addition of their first EV.

“We have the prospect of a massive mental ill health curve increasing post COVID, but an even larger one into the future with climate change impacts on mental ill health. Just ask those struggling to cope with last Summer’s bushfires, 10 year drought and recent floods across NSW. All of us have a role to play, and it is only by working together that we will make a difference.”

In a detailed statement, Reducing emissions to protect mental health and wellbeing, the organisations (which include SANE Australia, Mental Health Australia and Homelessness Australia among others from across Australia – full list below) say they are “deeply concerned about the growing negative mental health and wellbeing impacts of climate change on Australians”, and are calling on all governments, led by the Australian Government, to take eight key actions including:

The statement also highlights that without urgent action, the rates of climate-related trauma. Rachel Green, CEO of Independent Community Living Australia (ICLA), and co-author of the statement, said community and social service organisations are ready to step up and play their part, but more needs to be done as we simply aren’t prepared as a community to deal with the full impacts of climate change, particularly on vulnerable and marginalised Australians.

“Like many Australians, the devasting events of this summer brought home to me the frightening reality of what climate change means. At ICLA we saw first-hand the impacts that extreme heat, smoke and displacement have on people living with mental and physical health challenges, who often have less

ability to adapt. “Extreme heat, toxic bushfire smoke, rising seas levels, severe storms and floods, and their flow on effects, are all contributing to a growing crisis in mental health, homelessness and trauma, in addition to the terrible environmental and physical health impacts. This needs to be recognised and planned for, as it will be the most vulnerable among us who suffer the most and have the least resources to adapt. “The climate crisis isn’t just an environmental emergency, it’s a health emergency. We need urgent action now to reduce emissions, accelerate the move to a zero carbon economy.

Signatories to the statement:

For more than 30 years, Independent Community Living Australia (ICLA) has been supporting people with mental and physical health challenges to live independently, in a good home, and feel part of the community. We do this by: